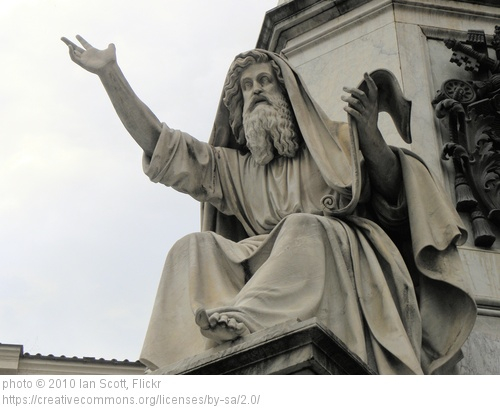 Jesus Christ is the great Exhorter of His Church – coming alongside people through the Holy Spirit to call them back to Him. Christ sits at the right hand of God in Heaven, “far above all principality and power and might and dominion, and every name that is named, not only in this age but also in that which is to come.” (Ephesians 1:20-21) Jesus is King of kings and Lord of Lords, “who alone has immortality, dwelling in unapproachable light, whom no man has seen or can see, to whom be honor and everlasting power.” (1 Timothy 6:15-16) Jesus is truly “our great God and Savior.” (Titus 2:13)

Church prophets can learn much from the Lord Jesus Christ about how to exhort Christians to live their lives in a manner “worthy” of God. Look at these prophetic pronouncements that Jesus gave the Apostle John to be delivered to seven churches in Asia Minor. Look at how Jesus approached each church and what was important to Him. As church prophets we want to be certain that what is important to us is always important to Christ.

Look for those three things in each of these communications from Christ to the seven churches.

Christ to the Church in Ephesus

“These things says He who holds the seven stars in His right hand, who walks in the midst of the seven golden lampstands: I know your works, your labor, your patience, and that you cannot bear those who are evil. And you have tested those who say they are apostles and are not, and have found them liars; and you have persevered and have patience, and have labored for My name’s sake and have not become weary. Nevertheless I have thisagainst you, that you have left your first love. Remember therefore from where you have fallen; repent and do the first works, or else I will come to you quickly and remove your lampstand from its place—unless you repent. But this you have, that you hate the deeds of the Nicolaitans, which I also hate. He who has an ear, let him hear what the Spirit says to the churches. To him who overcomes I will give to eat from the tree of life, which is in the midst of the Paradise of God.”

Christ to the Church in Smyrna

“These things says the First and the Last, who was dead, and came to life: I know your works, tribulation, and poverty (but you are rich); and I know the blasphemy of those who say they are Jews and are not, but are a synagogue of Satan. Do not fear any of those things which you are about to suffer. Indeed, the devil is about to throw some of you into prison, that you may be tested, and you will have tribulation ten days. Be faithful until death, and I will give you the crown of life. He who has an ear, let him hear what the Spirit says to the churches. He who overcomes shall not be hurt by the second death.”

Christ to the Church in Pergamos

“These things says He who has the sharp two-edged sword: I know your works, and where you dwell, where Satan’s throne is. And you hold fast to My name, and did not deny My faith even in the days in which Antipas was My faithful martyr, who was killed among you, where Satan dwells. But I have a few things against you, because you have there those who hold the doctrine of Balaam, who taught Balak to put a stumbling block before the children of Israel, to eat things sacrificed to idols, and to commit sexual immorality. Thus you also have those who hold the doctrine of the Nicolaitans, which thing I hate. Repent, or else I will come to you quickly and will fight against them with the sword of My mouth. He who has an ear, let him hear what the Spirit says to the churches. To him who overcomes I will give some of the hidden manna to eat. And I will give him a white stone, and on the stone a new name written which no one knows except him who receives it.“

Christ to the Church in Thyatira

“These things says the Son of God, who has eyes like a flame of fire, and His feet like fine brass: I know your works, love, service, faith, and your patience; and as for your works, the last are more than the first. Nevertheless I have a few things against you, because you allow that woman Jezebel, who calls herself a prophetess, to teach and seduce My servants to commit sexual immorality and eat things sacrificed to idols. And I gave her time to repent of her sexual immorality, and she did not repent. Indeed I will cast her into a sickbed, and those who commit adultery with her into great tribulation, unless they repent of their deeds. I will kill her children with death, and all the churches shall know that I am He who searches the minds and hearts. And I will give to each one of you according to your works.Now to you I say, and to the rest in Thyatira, as many as do not have this doctrine, who have not known the depths of Satan, as they say, I will put on you no other burden. But hold fast what you have till I come. And he who overcomes, and keeps My works until the end, to him I will give power over the nations— He shall rule them with a rod of iron; They shall be dashed to pieces like the potter’s vessels’—as I also have received from My Father; and I will give him the morning star. He who has an ear, let him hear what the Spirit says to the churches.”

Christ to the Church in Sardis

“These things says He who has the seven Spirits of God and the seven stars: I know your works, that you have a name that you are alive, but you are dead. Be watchful, and strengthen the things which remain, that are ready to die, for I have not found your works perfect before God. Remember therefore how you have received and heard; hold fast and repent. Therefore if you will not watch, I will come upon you as a thief, and you will not know what hour I will come upon you. You have a few names even in Sardis who have not defiled their garments; and they shall walk with Me in white, for they are worthy. He who overcomes shall be clothed in white garments, and I will not blot out his name from the Book of Life; but I will confess his name before My Father and before His angels. He who has an ear, let him hear what the Spirit says to the churches.”

Christ to the Church in Philadelphia

“These things says He who is holy, He who is true, He who has the key of David, He who opens and no one shuts, and shuts and no one opens: I know your works. See, I have set before you an open door, and no one can shut it; for you have a little strength, have kept My word, and have not denied My name. Indeed I will make those of the synagogue of Satan, who say they are Jews and are not, but lie—indeed I will make them come and worship before your feet, and to know that I have loved you. Because you have kept My command to persevere, I also will keep you from the hour of trial which shall come upon the whole world, to test those who dwell on the earth. Behold, I am coming quickly! Hold fast what you have, that no one may take your crown. He who overcomes, I will make him a pillar in the temple of My God, and he shall go out no more. I will write on him the name of My God and the name of the city of My God, the New Jerusalem, which comes down out of heaven from My God. And I will write on him My new name. He who has an ear, let him hear what the Spirit says to the churches.”

Christ to the Church in Laodicea

“These things says the Amen, the Faithful and True Witness, the Beginning of the creation of God: I know your works, that you are neither cold nor hot. I could wish you were cold or hot. So then, because you are lukewarm, and neither cold nor hot, I will vomit you out of My mouth. Because you say, ‘I am rich, have become wealthy, and have need of nothing’—and do not know that you are wretched, miserable, poor, blind, and naked—I counsel you to buy from Me gold refined in the fire, that you may be rich; and white garments, that you may be clothed, that the shame of your nakedness may not be revealed; and anoint your eyes with eye salve, that you may see. As many as I love, I rebuke and chasten. Therefore be zealous and repent. Behold, I stand at the door and knock. If anyone hears My voice and opens the door, I will come in to him and dine with him, and he with Me. To him who overcomes I will grant to sit with Me on My throne, as I also overcame and sat down with My Father on His throne. He who has an ear, let him hear what the Spirit says to the churches.”

What Jesus did next in addressing each of the seven churches was to be specific about their “works.” He pointed out both what He liked and what He didn’t like. That’s also the work of the church prophet. Two of the seven churches heard positive Words from Christ about their work. Both were persecuted churches. The other five were better off in light of what the world might call success, but Jesus saw through that to their true hearts. That’s what a church prophet should do. Not an easy or popular thing to do, but it’s what we’re called to do. Keep in mind that Jesus deeply loves His Church. He did not say what He said to the five churches because He didn’t love them. He said what He said “because” He loved them. The same is true for a church prophet. We must love the church or churches God calls us to with the same LOVE that took Jesus to the Cross. When we speak from hearts and minds filled with God’s Love, those who are true believers of Christ will hear God’s voice rather than ours.

In the next part of our study we will look at the profit of the prophet.

Crowns and Thrones: The Majesty of Our God (Part Two)

Warning and Lament: The Collapse of Civilizations (Part One)