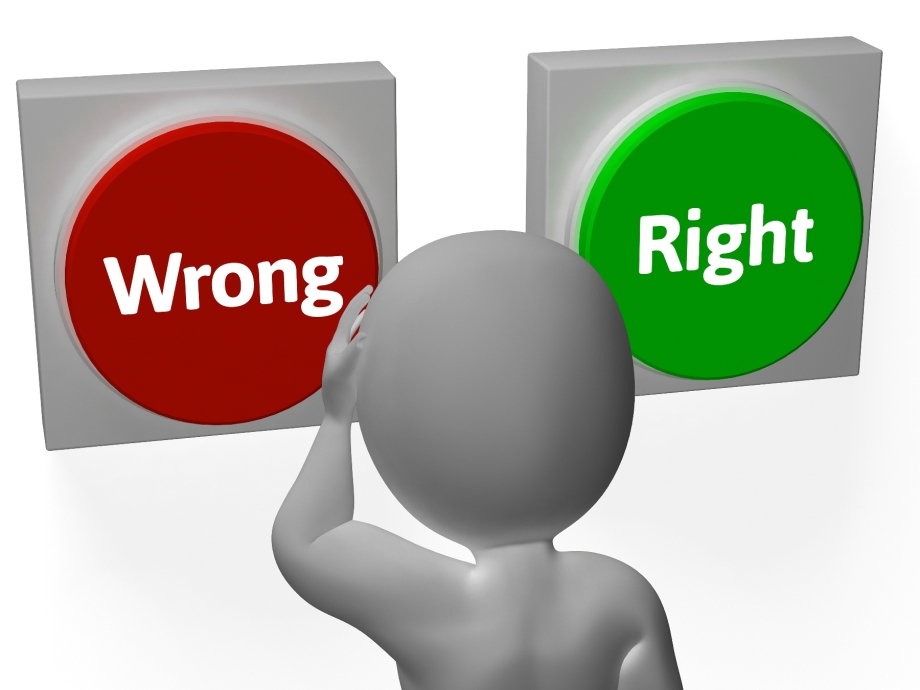 First, here are several English dictionary definitions of the word:

“An act, assertion, or belief that unintentionally deviates from what is correct, right, or true”

“belief in something untrue; the holding of mistaken opinions” (Dictionary.com)

I find this one interesting. It’s from the Webster 1828 Dictionary and includes the Latin word and meaning.

“ER’ROR, n. [L. error, from erro, to wander.] A wandering or deviation from the truth; a mistake in judgment, by which men assent to or believe what is not true. Error may be voluntary, or involuntary. Voluntary, when men neglect or pervert the proper means to inform the mind; involuntary, when the means of judging correctly are not in their power. An error committed through carelessness or haste is a blunder.”

The word error took on a new meaning when I became a Christian. I was reminded of that recently when someone asked me a question about something they heard on a religious radio program. Interestingly enough, that program is what started me on the path of an apologetics ministry more than 40 years ago.

The radio station I worked for in the early 1970’s changed its format from News/Talk to Gospel/Religion. That was quite a change for an atheist talk show host, but I stayed with the station and helped make the format change. Prior to the change, I spent four hours covering news followed by four hours hosting a talk show. That changed to about four hours of playing Gospel music and four hours of playing recorded religious programs.

It’s my own fault. In 1970, I challenged God to sit down with me in the radio studio for an interview. He didn’t show up, so I made fun of Him and people who believed in Him. What I didn’t know was that God heard my challenge and did show up in the radio studio. However, instead of doing things on my terms, He took control of events and showed me His terms.

God began by bringing a couple of strong Christians to my radio program to challenge my thinking about God and the Bible. Next, God led the owner of the radio station to quickly change formats and keep me on to help with the change. Instead of covering news and advocating for atheism on the radio every day, I played Gospel music and recorded religious programs. Since I had to introduce the music and programs, that meant I had to learn something about each singer, singing group, and preacher. That meant becoming familiar with spiritual things (mostly Christian) and being able to talk about them on the radio.

The paid religious programming I played meant very little to me as an atheist, but took on new importance when I came to faith in Christ. I spent a lot of my personal time reading the Bible, attending Bible studies and church services, and asking Christians questions about what I was learning in the Bible. It soon became obvious to me that the preaching and teaching on some religious radio programs I played disagreed with the preaching and teaching on other programs. It was also different than what I was learning at church, in Bible studies and in my own reading of Scripture.

One example was the radio ministry of The Worldwide Church of God. Garner Ted Armstrong was the host and teacher on the daily program. Part of my job as operations manager was to listen to every broadcast to make sure the tapes played back correctly. The station charged the sponsor based on the successful replay of the program, so I made sure it played and initialed the program log to show that it did. What I heard Armstrong say was quite different than what I was learning at church and in my own study, so I took my questions to one of the men God had used to answer my questions when I was an atheist.

I could always count on Dr. Edward Hindson to point me in the right direction. We didn’t have the Internet in 1971, but Dr. Ed had a great personal library at his house and introduced me to other men with access to lots of books about Christianity, religious history and cults. What I learned through the process of investigating the teachings of Armstrong on his radio program was my first journey into Christian apologetics.

I learned that The Worldwide Church of God with Garner Ted Armstrong had its beginning in the 1930’s with Armstrong’s father, Herbert W. Armstrong. The elder Armstrong grew up in a Quaker family, but joined the Church of God (Seventh Day) as an adult. He became a minister in the Church of God, but was eventually disfellowshipped because of some of his teachings (e.g. British Israelism). Armstrong started a daily radio ministry in Oregon that eventually became known as the Radio Church of God (later known as The World Tomorrow). He also published a small magazine called The Plain Truth. We received a copy of it at the radio station, so I showed it to Dr. Hindson as part of my research into what Armstrong believed and taught. He refuted Armstrong’s teachings using the Scriptures. That continues to be my primary process in apologetics –  check every teaching, every belief, against the clear meaning of the Word of God.

Garner Ted Armstrong, Herbert W. Armstrong’s son, was the host of both the radio and television editions of The World Tomorrow in 1971. Armstrong used an interesting technique of tying world current events to his interpretation of Bible prophecies. A major thrust of the program was to get listeners and viewers to call or write for copies of The Plain Truth. As I remembered it, the magazine was a large, full color print spread that contained information about current events and Armstrong’s prophetic views. I checked my memory online and found a good depository of The Plain Truth from 1934-1983. What the Armstrong’s wrote during that time is a clear demonstration of their personal beliefs about God and His Word.

The Radio Church of God has gone through many changes and divisions since its humble beginnings in 1934. The Worldwide Church of God became known as WCG and recently changed its name to Grace Communion International. It went through a type of doctrinal cleansing after the death of Herbert W. Armstrong in 1986 and is viewed by many as becoming orthodox in its teaching and practice (read CARM report). The National Association of Evangelicals accepted the Worldwide Church of God into fellowship in 1997 (read church report).

Studying conflicting doctrinal positions is challenging, but exciting at the same time. I found the challenge fulfilling and important to my growth as a Christian and future apologist. Studying “error” means learning “truth.” Looking into the teachings of Herbert W. Armstrong and Garner Ted Armstrong led me to learn about the Bible’s teaching concerning the worship of God on the Sabbath and on Sunday. I also learned about the Bible’s teachings concerning the Trinity, the physical (bodily) resurrection of Jesus Christ, salvation by grace through faith, whether saints became little gods after their resurrection, Judaism and the Tribes of Israel, keeping of the Old Testament laws, Jewish festivals vs. Christian holidays (e.g. Easter, Christmas), tithing (10% or 30%), heaven, hell, soul sleep, consulting medical doctors when sick,  among other things.

The importance of error in apologetics is learning to distinguish truth from error. Do you know how a federal agent learns to detect counterfeit money? They study the real money until they master its look and feel. The same is true for a Christian apologist. If you want to be able to detect counterfeit doctrine, study the real doctrine until you master the knowledge and wisdom within. The better you know the truth, the better you will know the lie.

Jesus promised His followers that the Holy Spirit would guide them “into all truth” (John 16:13), but also warned them that they would be “sheep in the midst of wolves” (Matthew 10:16) and would be persecuted for their faith in Christ (Luke 21:12). The Apostle Paul warned the leaders of the Christian church in Ephesus that people would rise up from inside the church, “speaking perverse things, to draw away the disciples after themselves” (Acts 20:30). Paul later wrote to Timothy about staying in Ephesus “that you may charge some that they teach no other doctrine, nor give heed to fables and endless genealogies, which cause disputes rather than godly edification which is in faith” (1 Timothy 1:3-4).

I learned very early in my Christian experience about the importance of investigating all teachings claiming to be from God. We must know the difference between truth and error and be able to teach others. Why? Paul explained it beautifully to Timothy:

“Now the Spirit expressly says that in latter times some will depart from the faith, giving heed to deceiving spirits and doctrines of demons, speaking lies in hypocrisy, having their own conscience seared with a hot iron, forbidding to marry, and commanding to abstain from foods which God created to be received with thanksgiving by those who believe and know the truth. For every creature of God is good, and nothing is to be refused if it is received with thanksgiving; for it is sanctified by the word of God and prayer. If you instruct the brethren in these things, you will be a good minister of Jesus Christ, nourished in the words of faith and of the good doctrine which you have carefully followed. But reject profane and old wives’ fables, and exercise yourself toward godliness.” 1 Timothy 4:1-7

“If anyone teaches otherwise and does not consent to wholesome words, even the words of our Lord Jesus Christ, and to the doctrine which accords with godliness, he is proud, knowing nothing, but is obsessed with disputes and arguments over words, from which come envy, strife, reviling, evil suspicions, useless wranglings of men of corrupt minds and destitute of the truth, who suppose that godliness is a means of gain. From such withdraw yourself.” 1 Timothy 6:3-5

Are you up for the challenge? If so, let us know how we can help.

One thought on “The Importance of Error in Apologetics”