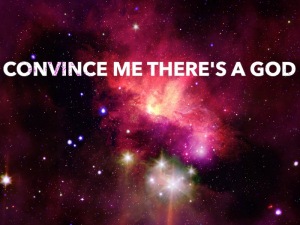 After leaving atheism for theism 42 years ago, I’m answering some of the most-asked questions from atheists: What happened to me? Did I lose my mind? Was I on drugs? How can an atheist possibly become a theist? Was I just a bad atheist? Is that what happened?

I admit that I brought this on myself. In 1970 I “dared” God to appear on my radio talk show if He “really” existed. God did not appear on my show that day, but He did several months later. I asked God to convince me He existed and He did just what I asked Him to do. He began the process of revealing Himself to me on my radio show.

I interviewed Dr. Henry Morris in early 1971 for the purpose of making fun of his belief in a worldwide flood and the existence of Noah’s Ark on a mountain range in Turkey. What Dr. Morris shared with me that day led to months of investigation to find out if what he told me was true.

We’ve already looked at serious questions about the Theory of Evolution and considered the Cosmological Argument, the Teleological Argument, Cosmic Fine-Tuning, and the Law of Causality. Today, we’ll look at The Laws of Thermodynamics.

I used to trust in science for answers to my questions about the universe, the earth, and life. That’s what I learned in school and it seemed to be a solid way of thinking and living.  However, even though I trusted science for information about life, I knew little about science. So, when I heard that science might support belief in the existence of God I wanted to know more. Even though I was an atheist, I was a journalist and searching out the truth is what a journalist does – wherever truth takes them.

Dr. Morris spoke about the Laws of Thermodynamics and its importance to understanding origins. Thermodynamics is the “physics that deals with the mechanical action or relations of heat” (Webster’s Ninth New Collegiate Dictionary, 1991).

The history of Thermodynamics as a scientific discipline goes back to the 17th century, but took off in the 19th century with scientists like Sadi Carnot, William Rankine, Rudolf Clausius, Emile Clapeyron, and William Thomson.

I learned that there are four basic laws or principles for Thermodynamics – starting with Zeroth and moving to the First, Second and Third Laws. What I remember learning was that the total amount of energy in the universe is constant and though it can change from one form to another, it cannot be created or destroyed. Dr. Morris called it the “principle of conservation.”

What I found most interesting was the Second Law of Thermodynamics which states that disorder increases (also known as the Law of Increased Entropy). Dr. Morris called it the “principle of disintegration.” While the quantity of of energy remains the same (First Law), the quality of energy deteriorates gradually over time (Second Law). Entropy increases as usable energy decreases and unusable energy increases.  That leads to an increase in disorganization, randomness and chaos. Dr. Morris believed the Second Law of Thermodynamics disproved “evolution.”

“The very terms themselves express contradictory concepts. The word “evolution” is of course derived from a Latin word meaning “out-rolling”. The picture is of an outward-progressing spiral, an unrolling from an infinitesimal beginning through ever broadening circles, until finally all reality is embraced within. “Entropy,” on the other hand, means literally “in-turning.” It is derived from the two Greek words en (meaning “in”) and trope (meaning “turning”). The concept is of something spiraling inward upon itself, exactly the opposite concept to “evolution.” Evolution is change outward and upward, entropy is change inward and downward.” (Evolution, Thermodynamics, and Entropy, by Henry Morris, Ph.D., icr.org)

So, what does this have to do with proving the existence of God? I was taught in high school and college that the universe is eternal and infinite. However, I learned from a study of the Second Law of Thermodynamics that energy deteriorates over time. If the universe was truly eternal, it would have already run out of energy and we would not exist. Since the universe is running out of energy every second but still has energy left for heat and work in our universe, it goes to prove that it had a beginning.

Evolutionists were not sitting idly by as the Laws of Thermodynamics were being discussed by theists as proof for God’s existence. For example, biologist Harold Blum wrote in the early 1950’s about reconciling the Second Law of Thermodynamics with organic evolution (Time’s Arrow and Evolution, Princeton University Press, 1951). Even earlier than Blum was Dr. Alfred Lotka, who wrote Elements of Physical Biology in 1924 dealing with evolutionary thermodynamics. The 1965 article by Jack Kirkaldy, Thermodynamics of Terrestrial Evolution, is also good to read for background.

Other arguments I remember that opposed the idea of the Second Law of Thermodynamics disproving evolution were:

The Laws of Thermodynamics did not prove to me that God exists, but were a strong argument that the universe had a beginning. Interestingly, the Bible starts with that very point – “In the beginning God created the heavens and the earth.” (Genesis 1:1) Dr. Morris and other scientists who believed in God used the Laws of Thermodynamics as part of their argument for the existence of God. If God did not Create the heavens and the earth, what did? What started everything? I was pointed to these words from the ancient Bible to answer that question – “By faith we understand that the worlds were framed by the word of God, so that the things which are seen were not made of things which are visible.” (Hebrews 11:3)

I needed a lot of convincing and God had much to show me. In our next study about the existence of God – we will look at the Law of Morality.

8 thoughts on “Convince Me There’s A God – Thermodynamics”