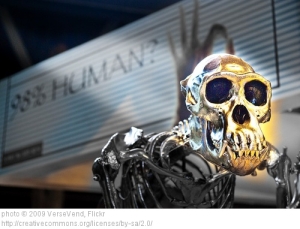 Atheists are always asking me for evidence that proves God exists. They usually bring up evolution as proof that God does not exist.

Evolution. Really? Well, I have some questions for them.

I used to believe in evolution. That’s what I learned in public school and some churches I attended as a child and teen taught that God could have used evolution to “create” the world. So, what about now? I believe God created the heavens and the earth without the use of evolution. Why do I believe that? God said He created the heavens and the earth in what appears to be a short period of time (Genesis 1) and evolution is a weak theory of why He didn’t.

A former atheist/evolutionist who becomes a theist/creationist can be a real pain-in-the-neck. I know because I am one and atheist/evolutionists tell me I am. Even though I love talking about lots of other things, creation/evolution comes up most often in discussions with atheists. They see that as one of the fastest ways to shut me up and prove their point. What they don’t know, but soon find out, is that the “theory” of evolution is one of the reasons I became a Christian.

Here’s an example of the kinds of discussions atheist/evolutionists like to have with theist/creationists. It’s the one about humans and chimps evolving from a common ancestor. I accepted that theory without question for years, but is it true? And if it is true, what impact does that have on Genesis 1?

Using the Bible to argue with an atheist is pretty much a waste of breath. Why would someone who doesn’t believe in God believe in “the Word” of God? They wouldn’t and don’t. So, what can we use as common ground? Truth. That includes facts, evidence and proof. Atheists put their trust in “science” as being truth. The problem with that is science “evolves.” It changes. Things that were thought to be scientific fact years ago are no longer fact. Something else, often the most recent finding, becomes fact. Atheists like to throw in our face that we believe in a 3,500-year-old book because, they say, it’s so out of date. No, what’s out of date is science books printed more than 10 or 20 years ago. The 3,500-year-old “book” Christians believe and trust is never out of date because of Who wrote it.

One of the problems with that high number of 98.4% is that it is wrong. Evolution-believing scientists have more recently lowered those numbers based on newer research. Evolutionist Jeremy Taylor wrote in his book, Not A Chimp: The hunt to find the genes that make us human (Oxford University Press, USA; 1 edition, August 31, 2009), that the view that chimps are practically human based on their genetic similarity is “nonsense.”

“It is one of the best-known pieces of scientific trivia–that human DNA and chimpanzee DNA differ by a mere 1.6%. But are we then just chimps with a few genetic tweaks? Are our language and our technology just an extension of the grunts and ant-collecting sticks of chimps?

In Not a Chimp, Jeremy Taylor describes one of the great scientific quests of our times–the effort to discover precisely what makes humans different from other primates, especially our closest evolutionary relative, the chimpanzee. Drawing on state-of-the-art science, Taylor convincingly debunks the assertion that our two species are nearly identical genetically. He sketches the picture now emerging from cutting-edge research in genetics, animal behavior, and other fields to show that the so-called 1.6% difference is effectively much larger, leading to a profound divergence between the two species. Indeed, he explains that the evolution of the human genome has accelerated since the split of chimps and humans from a common ancestor more than six million years ago. In fact, at least 7% of human genes–almost one gene in ten–have accumulated changes within the last 50,000 years. Some of the genes that have changed orchestrate entire sets of other genes, and recent studies show that it is this complex interaction–rather than the action of individual genes–that underlies speech processes, brain development, and a host of other mechanisms that make humans unique.

We humans are far different, genetically speaking, than chimps. More than that, we have been the architects of our own evolution through the same processes that have produced our farm animals and crop plants. We are the apes that domesticated themselves.” (Amazon.com)

I don’t agree with Taylor’s view about humans and chimps having a common ancestor, but find it interesting that an evolutionist can see what has been promoted as evolutionary “science” is not based on settled scientific fact. There is more research to be done on the part of scientists to “settle” the question.

Here’s a report about the similarity of mouse and human DNA from the National Human Genome Research Institute, National Institutes of Health.

Here are a couple of quotes from an interview that appeared in Australian news reports several years ago.

“There are a few differences, we have a few more of this, a few less of that, but they are the same genes and a lot of them are in the same order,’ center Director Jenny Graves told reporters in Melbourne.

‘We thought they’d be completely scrambled, but they’re not. There is great chunks of the human genome which is sitting right there in the kangaroo genome,’ Graves said, according to AAP.” (“Kangaroo genes close to humans,” Reuters, November 18, 2008)

So, what will evolutionists do with that scientific hurdle? They’ll come up with something else to talk about. The most recent is endogenous retroviruses (ERVs). Atheists have new ammunition and believe they’ve found the magic bullet to shut up creationists. Here’s how I responded to an atheist who presented ERVs to me as the final, settled science on the matter.

“Thank you for sharing the links to studies and reports about the ERV evidence for common ancestry. I think it’s too early to call the issue “resolved” as many evolutionists have claimed, but it’s definitely worth researching.

Some creationists question the methodology and what section of the genome was used in determining the findings about the ERV insertions. Here’s what one of them wrote about it.

‘Just like the appeal to human genetic testing, the analogy to literary plagiarism relies on a hidden—but critical—assumption: The ability to spot shared mistakes assumes knowledge of the language used. Hence, the claim that humans and chimps share DNA mistakes assumes that scientists speak the ‘language’ of DNA well enough to identify errors reliably.

Is this assumption true?

The shared ‘mistakes’ between the two genomes are most often found in the region of the genome previously labeled ‘junk.’ Evidence has been accumulating that ‘junk’ DNA is, in fact, functional. These data clearly indicate that the assumption behind the evolution claim is false—we do not speak the language of the genome well enough to reliably separate shared ‘mistakes’ from common design features. Hence, the claim that shared ‘mistakes’ prove common ancestry is invalid.”  (Dr. Nathanael Jeanson, Ph.D in Cell and Developmental Biology from Harvard University)

Very interesting. I’ll keep an open mind on this to see what comes from ongoing research and presentations from both evolutionists and creationists.

The most recent estimates I’ve seen about the time frame for the Chimpanzee-human last common ancestor (CHLCA) is 5-7 million years ago. I seem to remember during my investigation of evolution while still an atheist that the time frame was somewhere between 20 and 30 million years ago, so genetics research has cut that time significantly. However, I haven’t seen any evidence of what that CHLCA was and how long it existed from whatever it evolved from. Shouldn’t there be a mountain of evidence given the theory that these creatures existed for many millions of years? And what about whatever type of creature they evolved from? Where are the trillions of skeletons that should be easily found all over the earth that would prove conclusively that chimps and humans came from a common ancestor? That is one of the questions I asked during my investigation as an atheist. Where are the bones?

There are too many unanswered questions and too many unproven claims about evolution for me to believe it any longer. That’s why I left that theory behind more than 40 years ago and nothing I’ve seen yet has turned me back to it.”

I don’t think for a minute that the debate is finished for one side or the other. I do think it’s important as Christians who believe that God created the heavens and the earth and all living things to stay informed and vigilant in the battle for truth. True science (science which is settled as true) will not be in opposition to biblical truth and biblical truth will not be in opposition to true science.

As the Apostle Paul wrote almost 2,000 years ago – “O Timothy, keep that which is committed to thy trust, avoiding profane and vain babblings, and oppositions of science falsely so called: Which some professing have erred concerning the faith.” 1 Timothy 6:20-21

18 thoughts on “Of Mice and Men, Kangaroos and Chimps”

Can Christians Prosper In The ‘New Normal’? (Part Four)

The Great Reveal: Our Epic Journey Through Time, Space and Eternity – Part 26