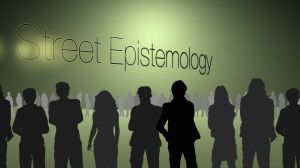 Avoid Facts. That’s the heading under ‘Part II: Strategies’ in atheist Peter Boghossian’s 2013 book titled A Manual For Creating Atheists. I find that both interesting and insightful to the methodology of what Boghossian calls ‘street epistemology.’

That statement, ‘Avoid Facts,’ is counterintuitive to my training and experience as an investigative journalist. ‘Fact’ is defined by a variety of dictionaries as ‘something that actually exists; reality; truth; something known to exist or to have happened; information used as evidence or as part of a report or news article.’

People like journalists, detectives, educators, scientists and scholars use ‘facts’ and ‘evidence’ as vital and necessary to their profession. The idea of ‘avoiding facts,’  it seems to me, is opposed to the search for truth.

“When I teach beginning Street Epistemologists how to help rid the faithful of their affliction and anchor their beliefs in reality, one of the most difficult strategies to get across is: do not bring particular pieces of evidence (facts, data points) into the discussion when attempting to disabuse people of specific faith propositions. Many rational, thoughtful people think that somehow, magically, the faithful don’t realize they are not basing their beliefs on reliable evidence–that if they were only shown solid evidence then voila, they’d be cured! This is false. Remember: the core of the intervention is not changing beliefs, but changing the way people form beliefs–hence the term ‘epistemologist.’ Bringing facts into the discussion is the wrong way to conceptualize the problem: the problem is with epistemologies people use, not with conclusions people hold.” (A Manual For Creating Atheists, Pitchstone Publishing, 2013, chapter 4, Interventions and Strategies)

This is a paradigm shift (fundamental change in approach or underlying assumptions) for atheists. Our approach in the 1960s and early 70s (when I was an atheist) was to attack the ‘fact lack’ in theism and Christianity in particular. (We mockingly called Christianity a ‘lack-o-fact’ religion.) Christians and other theists were not very good with ‘facts’ in those days and usually fell back on their ‘faith’ (the blind kind) to respond to atheist attacks using facts. It was pretty easy as an atheist to defeat Christian arguments back then.

However, that changed dramatically during the 1970s and 80s and exploded in the 90s and the new millennium. Christian apologists armed with ‘facts’ took on atheism and demonstrated the power of ‘evidence’ when discussing theism and Christianity with non-believers. I became a Christian in 1971 through the process of investigating facts (evidence) for theism and the Christian worldview, which gave me a front-row seat to the paradigm shift in Christianity and the growing impact of Christian apologists.

If I had been an atheist instead of a Christian during that fundamental change in Christian apologetics during the last 40+ years, I would probably have been heavily involved in searching for and promoting a paradigm shift in the way atheists responded to the heavily fact-based evidential apologetics we see in Christianity today. What Peter Boghossian and other atheists are doing through ‘street epistemology’ makes perfect sense to me. What atheists were doing wasn’t working, so they fundamentally changed the way they talked with people of ‘faith.’ Avoid Facts.  Makes perfect sense.

Boghossian points out in his book that introducing facts into discussions with theists may also prove unproductive ‘because this usually leads to a discussion about what constitutes reliable evidence.’ Boghossian believes that almost all theists suffer from an acute form of confirmation bias. ‘They start with a core belief first and work their way backward to specific beliefs.’ Boghossian believes that ‘every religious apologist is epistemically debilitated by an extreme form of confirmation bias.’

Boghassian sees ‘avoiding facts’ as an important part of their ‘treatment.’ Here’s  how he explains that to street epistemologists.

“Doxastic closure almost always results from pressures independent of evidence. Therefore you should avoid facts, evidence, metaphysics, and data points in discussions with those suffering from faith-based forms of doxastic closure. It won’t advance their treatment. It won’t help subjects to abandon their faith. What will  help is maintaining your focus on epistemology and using the techniques discussed here and in the next chapter on Socratic questioning.’ (Chapter 4, Interventions and Strategies)

“The tools and allies of faith–certainty, prejudice, pretending, confirmation bias, irrationality, and superstition–all come into question through the self-awareness of ignorance.” (A Manual for Creating Atheists, Peter Boghossian, Chapter 3)

“To be clear, I didn’t just find your blog. I only just stumbled on the SE article and found it interesting. I haven’t read every word of your work, but I have looked at every article, skimmed the content and looked for evidence. Again, without a basic “start with God’s existence” and then work backward, I don’t see anything new. Also, that is a biased approach I think we can all agree on.”

“I suspect that your statement “I’m open to new reliable evidence” is at the heart of the discussion here. I cannot honestly say I know the truth of any faith-based claim. What I can say is that I am in search of the truth. What raises a “red flag” for me is someone who claims they know the truth and are more than willing to demonstrate why their particular brand of truth is the “right” truth. This is probably nothing more than confirmation bias. Again, I am open to reliable evidence to change my mind.”

“You said that you “became a theist through the process of investigating evidence presented to me by Christians and evidence I found on my own during the investigatory process.”

Did you do the same investigation in other religions? Did you have to believe first, as a I have heard multiple time, ‘open your heart to Jesus first, before you can know him?’ How did you elevate confirmation bias in this endeavor?

Words like ‘investigative,’ and ‘professional skills,’ are important to me in my career too and help guide me to a conclusion. The problem I see is that you use dubious claims like 1 Corinthians 15 as evidence of the resurrection. Over 500 people saw him, but is that a very good investigation? The passage doesn’t contain any names of the witnesses, and there is no information of any investigation by the Corinthians having investigated the claim…as I remember, they were hundreds of miles from Palestine. Is that a bias free and truth determining method?

To be clear, I would really like to see more information from your investigation and see how you built in a reliable method to remove bias and test falsifiability. That would be awesome.”

Here are some examples of how I replied to street epistemologists questioning me about ‘confirmation bias.’

“I was skeptical during my investigation into the evidence for theism and Christianity because I didn’t believe in the supernatural. I looked at all the evidence I could find and asked every question I could think of to get to the truth, but I didn’t let go of my disbelief in the supernatural. That was my presupposition and as an investigative reporter I knew that presuppositions were dangerous to discovering the truth. I had to be open to the possibility that the supernatural existed. I didn’t believe it existed, so that was something I had to struggle with during the investigation.

The journey I’m writing about in ‘Convince Me There’s A God’ is a look at the investigative process that led me to believe in God’s existence. Because of my presupposition that the supernatural didn’t exist, I looked at the evidence from a skeptical perspective. What I found through the study of archaeology and history was that the Bible was a credible compilation of ancient documents. That brought me to the life of Jesus Christ. Even though the ancient records indicated that a man named Jesus lived in Israel during the 1st century AD, I didn’t believe He did anything supernatural. It was after following the various biblical and extra-biblical historical evidences concerning Jesus’ life, death and resurrection that the real possibility of the supernatural began to take shape. If Jesus rose from the dead, the other miracles attributed to Him were not out of the realm of possibility. If Jesus did not rise from the dead, then, as Paul wrote, the Christian worldview fails.”

“I studied Hinduism, Shintoism, Buddhism, and Taoism prior to becoming an atheist. I conducted an investigation into the claims of theism, the Bible and Christianity for several months and was skeptical during most of that time. I did not ‘believe first,’ ‘open my heart to Jesus first.’ As for confirmation bias, my preconceived belief going into the investigation was there was no God and the Bible was mythological and fanciful. My confirmation bias was ‘against’ believing in God, so I had to use investigative skills to be open to wherever the evidence might take me.

Paul did list the names of several people in 1 Corinthians 15. In addition to himself, Paul said that Jesus was seen by Cephas, the twelve apostles (known by name to the Corinthian Christians), James (half brother of Jesus), and more than 500 people at the same time, ‘of whom the greater part remain to the present.’ This was an open invitation to anyone to talk with the people Paul mentioned and ask them what they saw. Even though Corinth was a long distance from Jerusalem, people in the 1st century made trips of that length and longer with some regularity.

Paul lived in Jerusalem for many years and was well aware of the claims about Jesus’ resurrection. He didn’t believe it and worked with Jewish leaders to bring an end to the claims until Jesus revealed Himself to Paul. Paul later met with the apostles he mentioned in his letter to the Corinthians to verify many things personally. Paul did his own investigation, then reported what he knew to be true to people in many countries.

Your request is one of hundreds of similar requests I’ve received through the years from atheists and is the primary reason I’m writing a detailed explanation about my investigation. It’s called ‘Convince Me There’s a God’ and can be found on this blog site.

“I would recommend the careful process of investigating truth claims from each of the worldviews to determine which view has the best arguments from evidence. One of the difficult parts of doing that is confirmation bias and presuppositions. My bias and presupposition as an atheist investigating theism and Christianity was my strong atheism. I had to use the disciplines of investigative journalism to counter my bias toward theism in order to honestly approach truth claims of the theistic worldview and Christianity.”

We’ll look even deeper next time in Street Epistemologists – On Guard.

5 thoughts on “Street Epistemologists – On Guard 3”