“For I know this, that after my departure savage wolves will come in among you, not sparing the flock.”

We are well into our special series about identifying false preachers and teachers. However, some Christians wonder what all the fuss is about. Some people have told me I should not oppose any preacher or teacher who names the name of Jesus. That’s an interesting thing to say in light of what we read in the Bible and see in the history of Christianity.

Wow! I wonder what the New Testament has to say about that.

“Beware of false prophets, who come to you in sheep’s clothing, but inwardly they are ravenous wolves.” Matthew 7:15 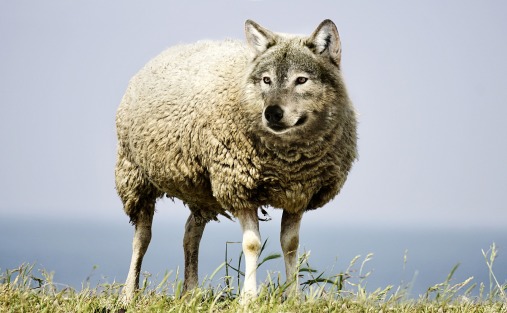 It didn’t take Jesus of Nazareth long before He warned His disciples about false preachers and teachers. He warned them in the early part of His ministry and as He prepared His disciples for what would happen after He returned to Heaven and prior to His return to earth –

“Now as He sat on the Mount of Olives, the disciples came to Him privately, saying, ‘Tell us, when will these things be? And what will be the sign of Your coming, and of the end of the age?’ And Jesus answered and said to them: ‘Take heed that no one deceives you … Then many false prophets will rise up and deceive many … Then if anyone says to you, ‘Look, here is the Christ!’ or ‘There!’ do not believe it. For false christs and false prophets will rise and show great signs and wonders to deceive, if possible, even the elect. See, I have told you beforehand.” Matthew 24:3-4, 11, 23-25

We saw in the last part of our series how a Jewish audience listening to Jesus of Nazareth in the early part of the 1st Century AD would understand the words “false prophets” and  ‘wolves’ in ‘sheep’s clothing”?

Let’s now look at what the disciples of Jesus taught about that after Jesus Christ returned to Heaven, with a view toward false preachers and teachers being both ungodly and dangerous.

False preachers and teachers are not just a ‘nuisance’ in churches, conferences and denominations. They are UNGODLY and DANGEROUS! The fact that there are so many of them (false preachers and teachers) and there is so little warning about them boggles my mind. How could we let this happen when Jesus and His apostles were so clear in their warnings almost two-thousand years ago? It’s not like we just found out in 2020 that there are people in churches who preach and teach false doctrine. We’ve known about it since the beginning of Jesus’ preaching!

What about this statement do we not understand?

“Beware of false prophets, who come to you in sheep’s clothing, but inwardly they are ravenous wolves.” Matthew 7:15

“For I know this, that after my departure savage wolves will come in among you, not sparing the flock.” Acts 20:29

This warning from the Apostle Peter –

“But there were also false prophets among the people, even as there will be false teachers among you, who will secretly bring in destructive heresies.” 2 Peter 2:1

This warning from the Apostle John –

“Beloved, do not believe every spirit, but test the spirits, whether they are of God; because many false prophets have gone out into the world.” 1 John 4:1

And this warning from Jude –

“For certain men have crept in unnoticed, who long ago were marked out for this condemnation, ungodly men, who turn the grace of our God into lewdness and deny the only Lord God and our Lord Jesus Christ.”Jude 1:4

We will look at many other warnings from Jesus and the apostles as we go through this series, but the first point is one of the most important –

False preachers and teachers are ungodly and dangerous!

The Danger of ‘Celebrity’

You may be saying an ‘amen’ right now, but what if you learned one of your favorite preachers, teachers or worship leaders was really a ‘wolf’ in sheep’s clothing?

Would you, could you, still say amen if you found out your pastor was a false preacher or teacher?

Would you, could you, still say amen if you found out a favorite speaker at a conference you were attending was a false preacher or teacher?

Would you, could you, still say amen if you found out some of your most important denominational leaders were false preachers or teachers?

Would you, could you, still say amen if you learned some of your favorite ‘Christian’ authors or devotional writers were false preachers or teachers?

Would you, could you, still say amen if you found out some of your favorite ‘Christian’ song writers were false preachers or teachers?

What would you say if you discovered that some of your favorite ‘Christian’ TV preachers or teachers were really false prophets – just like the kind Jesus and His apostles warned about in the New Testament?

We have watched Christians around the world get swept up into a type of ‘celebrity culture’ that doesn’t allow for critical thinking, reason or logic. Anyone who does think for themself and raises questions about the theology of these so-called ‘Christian celebrities’ is often accused of being small-minded, bigoted, biased or unloving.

We have allowed preachers and teachers to become ‘rock stars’ in this Christian celebrity culture. We have turned our brains, hearts and souls over to people who very well may be ungodly and dangerous. WARNING!

We often romanticize what it must have been like to be part of the 1st century Church; to personally know the apostles and hear stories about what it was like to walk with Jesus and see Him alive after His Resurrection.

The fact is that 1st century Christianity was dangerous. We learn that as soon as we open the pages of the Book of Acts and read what Christians faced in those early days. They were often persecuted, jailed and even killed for their faith in Christ.

We also learn about the dangers as we read the letters the apostles sent to various churches in the 1st century. False preachers and teachers were already busy tearing into the flock of God.

Here are two examples of what Jesus thought about the danger at the end of the 1st century. He dictated letters to John the Apostle to deliver to seven churches in the region of Asia Minor (western part of modern-day Turkey).

“But I have a few things against you, because you have there those who hold the doctrine of Balaam, who taught Balak to put a stumbling block before the children of Israel, to eat things sacrificed to idols, and to commit sexual immorality. Thus you also have those who hold the doctrine of the Nicolaitans, which thing I hate. Repent, or else I will come to you quickly and will fight against them with the sword of My mouth.” Revelation 2:14-16

“Nevertheless I have a few things against you, because you allow that woman Jezebel, who calls herself a prophetess, to teach and seduce My servants to commit sexual immorality and eat things sacrificed to idols. And I gave her time to repent of her sexual immorality, and she did not repent. Indeed I will cast her into a sickbed, and those who commit adultery with her into great tribulation, unless they repent of their deeds. I will kill her children with death, and all the churches shall know that I am He who searches the minds and hearts. And I will give to each one of you according to your works.” Revelation 2:20-23

The Apostle Paul also warned Christians about the dangers of false preachers and teachers. This is from his letter to churches in the region of Galatia (central part of modern-day Turkey).

“I marvel that you are turning away so soon from Him who called you in the grace of Christ, to a different gospel, which is not another; but there are some who trouble you and want to pervert the gospel of Christ. But even if we, or an angel from heaven, preach any other gospel to you than what we have preached to you, let him be accursed. As we have said before, so now I say again, if anyone preaches any other gospel to you than what you have received, let him be accursed.” Galatians 1:6-9

What Jesus and Paul said to church leaders and members would have been received as personal. There’s no way around that. We can’t talk about the dangers of false preachers and teachers without it becoming personal. They are persons known and often loved and admired by other persons. The point here is that the danger is clear and present – personality and celebrity cannot and should not be an issue.

Why Not Name Them Now?

Jesus and His apostles spoke and wrote for the long game. Their teachings have helped Christians identify false preachers and teachers for almost two-thousand years. Their teachings will continue to do that for as many years as we have between now and our Lord’s return.

What is important for us to remember is that false preachers and teachers are described as being ‘ungodly’ and ‘dangerous’ to your spiritual health.

We will look at how false preachers and teachers are everywhere and into everything ‘Christian’ in the next part of our special series – A Layman’s Guide To False Preachers and Teachers.

A Layman’s Guide To False Preachers and Teachers Part 1

A Layman’s Guide To False Preachers and Teachers Part 2

A Layman’s Guide To False Preachers and Teachers Part 3

We have been publishing articles and eBooks about false preachers and teachers for many years. Here are some you may find helpful:

A Prophet’s Perspective About Prophets

Thinking About Christian Unity – Part One

Crowns and Thrones: The Majesty of Our God (Part Two)

Warning and Lament: The Collapse of Civilizations (Part One)