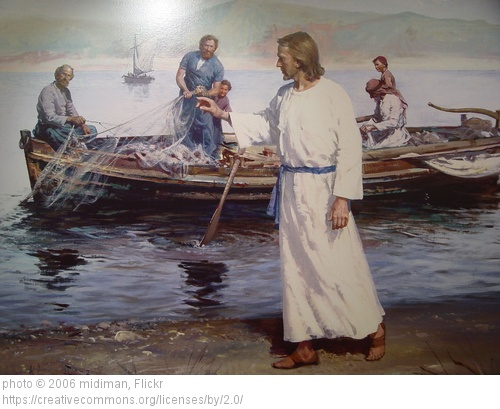 Knowing whether Jesus was real human flesh or an appearance (illusion) is simple. Did He appear to be human to the people who knew Him? Could they see Him, hear Him, and touch Him? Did Jesus do human things – like walk, talk, eat, drink, sit, stand, and sleep? Did He experience hunger and thirst? Did He feel pain? Did He feel the presence of others around Him? Did He know when someone touched Him? Did He suffer? Did He laugh and cry? Did He have human emotions? Did He love people? Did He care about people and express compassion toward them? Did He get angry? Did He express that anger? Did physical objects move when He moved them? Did physical objects move Him? The answer to all of these questions is a resounding YES!

The second human being to be impacted by the physical conception of Jesus was Joseph – the man who was going to be Mary’s husband. Here’s how Joseph found out Mary was pregnant with a physical baby.

“Now the birth of Jesus Christ was as follows: After His mother Mary was betrothed to Joseph, before they came together, she was found with child of the Holy Spirit. Then Joseph her husband, being a just man, and not wanting to make her a public example, was minded to put her away secretly.” Matthew 1:18-19

Joseph discovered that Mary was pregnant before they had come together sexually. He could have made Mary a public example, but he didn’t. He intended to dissolve their relationship secretly so no trouble would come to Mary or her family. As Joseph was considering this, an angel came to him in a dream with this message:

“Joseph, son of David, do not be afraid to take to you Mary your wife, for that which is conceived in her is of the Holy Spirit. And she will bring forth a Son, and you shall call His name JESUS, for He will save His people from their sins.’ So all this was done that it might be fulfilled which was spoken by the Lord through the prophet, saying: ‘Behold, the virgin shall be with child, and bear a Son, and they shall call His name Immanuel,’ which is translated, ‘God with us.” Matthew 1:20-23

Joseph woke from his dream and did what the angel told him to do. Joseph took Mary to be his wife and had no sexual relations with her until she “gave birth to a son.”

The story of the birth of Jesus is one of the best-known stories in the world. People know the birth of Jesus as the Christmas story. We tell the story every year about the Baby Jesus born in a manger because there was no room for His parents in the inn. We love to hear about the shepherds keeping their flocks at night who learn about the Baby Jesus and how they go to Bethlehem to see the Child. We are reminded every year about the wise men who came from the East searching for the prophesied King of Israel. The Birth of Jesus is well documented in Matthew and Luke’s Gospels. The story is always about a physical baby born to physical parents. There’s never a word or hint that the baby was an illusion. Mary gave birth to her first Child. She felt the pains of childbirth. Ask Mary and she would tell you she had a real baby.

Everything we read about Jesus in the years after His Birth is physical. He spent His first days wrapped in swaddling cloths, lying in a manger (Luke 2:7). That’s physical. Jesus was circumcised when He was eight days old (Luke 2:21-24). No way to circumcise an illusion. Simeon held the Baby Jesus in his arms and prophesied about the Lord (Luke 2:25-32). That’s physical. An angel warned Joseph that King Herod wanted to kill the Baby Jesus, so Joseph took Mary and Jesus and traveled to Egypt. They stayed there until Herod was dead. God warned Joseph in a dream about returning to Judea, so Joseph took Mary and Jesus to live in the city of Nazareth in the region of Galilee (Matthew 2:13-23). Joseph’s concern was about physical harm coming to Jesus. Illusions can’t be harmed. When Jesus was 12 years old, He spent three days on His own in Jerusalem both listening to and asking questions of teachers in the Temple. Joseph and Mary searched for Jesus for days and finally found Him at the Temple. They were concerned about His safety. They all returned to Nazareth and Jesus was subject to them (Luke 2:41-52). Again, a physical relationship and concern for his physical safety.

In our next study, we’ll look at Jesus as an adult and the evidence of His Humanity during His Ministry.