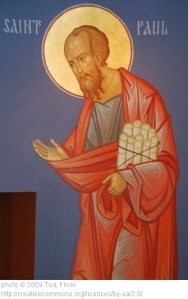 We are laying an historical foundation for answering questions about the involvement of Saul of Tarsus in the growing movement of Jews who followed the crucified and risen Jesus Christ. There are many people today who identify themselves as followers of Jesus Christ who believe Paul was a fraud and not a true apostle of Jesus Christ. Because of that they do not subscribe to Paul’s epistles as Scripture, thus cutting out almost half of the Books of New Testament. Many of them believe 2 Peter is also fraudulent, which contains Peter’s support of Paul as an apostle and author of Scripture.

Paul made it clear in his epistles that he was “an apostle of Jesus Christ by the will of God” (Ephesians 1:1) and that he was speaking and writing what Jesus had revealed directly to him (1 Corinthians 9). So, for a group of Christians to deny that Paul was an apostle and to declare his writings as fraudulent is a major problem.

This is not the first time in the history of the Church that groups have opposed Paul’s apostleship and questioned his writings. As we continue laying the historical foundation for answering serious questions by these groups, we will also look at the history of anti-Pauline theology.

The problem between the Jewish leaders and the apostles and disciples of Christ had been growing bigger for months and exploded with the stoning death of Stephen, a deacon in the congregation of Christ followers. Saul was a part of the crowd that stoned Stephen and was a leader in the great persecution of believers that followed.

“At that time a great persecution arose against the church which was at Jerusalem; and they were all scattered throughout the regions of Judea and Samaria, except the apostles. And devout men carried Stephen to his burial, and made great lamentation over him. As for Saul, he made havoc of the church, entering every house, and dragging off men and women, committing them to prison.” Acts 8:1-3

The result of that persecution was not what Saul or the Jewish leaders had intended.

“Therefore those who were scattered went everywhere preaching the word.” Acts 8:4

Instead of running wildly for their lives and hiding from Saul and the soldiers from the high priest, the Christ followers preached the message of Jesus everywhere they went. The remaining verses in Acts 8 contain stories about what happened as they preached.

As we saw in our last study, Saul was on his way to Damascus with letters from the high priest written to the synagogues of Damascus giving Saul permission to arrest “any who were of the Way, whether men or women” (Acts 9:2) so he could arrest them and bring them bound to Jerusalem.

We also saw that Jesus interrupted Saul’s trip and blinded him with a great light that “shone around him from heaven” (Acts 9:3) Saul heard a voice calling to him saying, “Saul, Saul, why are you persecuting Me?” (Acts 9:4) Saul asked the voice who He was and the Lord said, “I am Jesus, whom you are persecuting” (Acts 9:5).

Jesus told Saul to get up and go into the city where he would be told “what you must do” (Acts 9:6). The soldiers and others who were with Saul heard a voice but didn’t see anyone. Because Saul was blind the soldiers led him by the hand into Damascus. Saul was blind for three days and didn’t eat or drink. (Acts 9:7-9)

The next event Luke wrote about was a conversation between Jesus Christ and one of His disciples in Damascus. Question: how did Luke know what Jesus and Ananias talked about that day? Answer: Luke was an excellent historian. The work of a journalist is also historical in nature, so I understand how Luke got his information. In fact, he’s already told us.

“Inasmuch as many have taken in hand to set in order a narrative of those things which have been fulfilled among us, just as those who from the beginning were eyewitnesses and ministers of the word delivered them to us, it seemed good to me also, having had perfect understanding of all things from the very first, to write to you an orderly account, most excellent Theophilus, that you may know the certainty of those things in which you were instructed … The former account I made, O Theophilus, of all that Jesus began both to do and teach, until the day in which He was taken up, after He through the Holy Spirit had given commandments to the apostles whom He had chosen.” Luke 1:1-4; Acts 1:1-2

Luke did what historians do – he interviewed the people who made the history. Luke said that he had “perfect understanding of all things from the very first” and used that understanding to write an orderly account to Theophilus so he would “know the certainty of those things in which you were instructed.” One of the people Luke most likely interviewed was Ananias.

It’s also important to remember that the Holy Spirit is at the center of everything going on in Israel, Samaria, Syria and other places where He spread the Gospel of Jesus Christ. The Spirit of God spoke directly to those early believers, as we will soon see, and may have given information to Luke that he was not able to gain from personal interviews.

Jesus spoke to Ananias, who lived in Damascus, in a vision. The Lord told him to get and go to a “street called straight, and inquire at the house of Judas for one called Saul of Tarsus, for behold, he is praying.” Jesus went on to tell Ananias that Paul had already seen Ananias in a vision coming to put his hands on him so he could receive sight again. You might imagine Ananias’ response.

“Then Ananias answered, ‘Lord, I have heard from many about this man, how much harm he has done to Your saints in Jerusalem. And here he has authority from the chief priests to bind all who call on Your name.” Acts 9:13-14

That statement by Ananias confirms Luke’s earlier information about Paul being an enemy of Christ and His followers. How Jesus responded to Ananias give us great insight to the unique ministry He had planned for Paul.

“But the Lord said to him, ‘Go, for he is a chosen vessel of Mine to bear My name before Gentiles, kings, and the children of Israel. For I will show him how many things he must suffer for My name’s sake.” Acts 9:15-16

Look at those words closely:

We’ve already seen that Jesus chose Saul of Tarsus on the road to Damascus. Now, we see that Saul (Paul) was a “chosen vessel of Mine.” That is an extremely personal phrase pointing to Paul’s purpose and position. Paul belonged to Jesus Christ and would perform the duties of a “chosen vessel.” The Greek is skeuos ekloges estin moi – literally, “a vessel of choice is to me.” The word for “vessel” (skeuos) means “container, implement.” The word for “chosen” (ekloges) means “the act of picking out, choosing.” The words for “is to me” (estin moi) carry the idea of personal choice. Jesus told Ananias that He chose Saul to be a container/implement for Himself. The Lord made a personal choice that Saul would belong to Him and be useful as a container for His purpose.

The work that Jesus purposed for Saul was “to bear My name.” Jesus intended for Saul to be His “chosen vessel” (container) to bear His Name “before Gentiles,” followed by “before kings,” and “before the children of Israel.” To top it off, Jesus said that Saul would “suffer for My name’s sake.” Paul would suffer in his position as a “chosen vessel” for the Lord.

When you look at the life that Saul (Paul) lived after his conversion, did it look anything like the life that Jesus prophesied to Ananias? If it did, then Paul was obedient to his calling. If not, then Paul was not obedient. The words of Jesus to Ananias are key to whether Paul was a true apostle of Christ or a fraud.

Ananias went to the house where Saul was staying, entered the house and laid hands on him. Ananias accomplished four things in his message to Saul:

Saul received his sight immediately when something like scales fell from his eyes. He arose, was baptized, received food, was strengthen and “spent some days with the disciples at Damascus.” Acts 9:18-19

Then all who heard were amazed, and said, ‘Is this not he who destroyed those who called on this name in Jerusalem, and has come here for that purpose, so that he might bring them bound to the chief priests?’ But Saul increased all the more in strength, and confounded the Jews who dwelt in Damascus, proving that this Jesus is the Christ.” Acts 9:20-22

What caused this amazing change in Saul? Two things: he was filled with the Holy Spirit and he spent time with the disciples at Damascus (Acts 9:17-19). We’re only into the first several days of Saul’s life as a follower of Jesus Christ and already the evidence is mounting in favor of the future of Pauline theology.

This evidence is powerful for sure, but it’s just the beginning. In the next part of our investigation into whether Paul was an apostle or a fraud, we’ll see what the Lord’s 12 Apostles did when Saul returned to Jerusalem from Damascus and wanted to meet them.