I sometimes agree with N.T. Wright and often disagree with him. He has the kind of mind that challenges one’s thinking, even when you think you ‘know’ he’s wrong about something.

As I do with any of N.T. Wright’s books or articles, I go in with eyes and ears wide open. Dr. Wright is a brilliant academician. He has taught at Cambridge, McGill, Oxford and Harvard universities, and is currently research professor of New Testament and early Christianity at the University of St. Andrews in Scotland. He was at one time Bishop of Durham, Canon Theologian of Westminster Abbey, and Dean of Lichfield Cathedral. Wright is a prolific author of more than 30 books and travels the world speaking at major conferences. However, the question with any of his writings is not about his brilliance or his active schedule, but his accuracy. Is Dr. Wright right? Maybe he is or maybe he isn’t, but one thing we can count on with any of his writings is that we will find both our minds and hearts challenged by his.

That leads us to the ‘newest’ book by N.T. Wright – “The Challenge of Jesus: Rediscovering Who Jesus Was and Is” – released earlier this month. I qualify calling this Wright’s ‘newest’ book because it is an updated version of a book he wrote in 1999 (InterVarsity Press). So, is there any benefit to reading a 15-year-old book with an updated introduction to the new edition? I think there is. 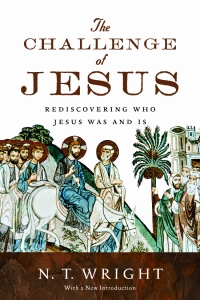 The most immediate benefit for many may be that they did not read the 1999 edition of the book. However, even if you did read the original, you may find the new edition a good intellectual and spiritual exercise. I do have some reservations about parts of the book, which I will address briefly soon. First, the purpose of this edition.

Dr. Wright explained his reason for re-publishing The Challenge of Jesus with these words:

“Jesus continues to challenge us all in various ways. When I wrote the original lectures on which this book is based, in something of a hurry for the conference in January 1999, I never imagined the twists and turns that would be taken in the scholarly world, in the popular Christian world and in the wider world of the dangerous twenty-first century that was about to dawn. I remain convinced that the picture I sketched of Jesus, and of the challenge he presents to those who follow him in today’s world, makes good sense historically, theologically and practically. But new things have happened. In the world of scholarship, things have not stood still. Thought I have been working in other areas–in the life of the church and the study of Paul–three areas of continuing discussion have nonetheless caught my eye … Nobody imagined, in January 1999, what would happen less than three years later, as planes smashed into buildings and the world changed forever. The Western World, and the Western church, was embarrassingly unprepared, not just for the terrible and wicked deeds of September 11, 2001, but for the worldview challenges it offered.” Introduction, p. 1

My wife and I visited New York City in April of 1999 and we remember admiring the size and strength of the Twin Towers that were destroyed less than three years later. I found myself thinking as I read The Challenge of Jesus how much things have changed in our world since the book was first published in October 1999. It was helpful to remember that Dr. Wright first delivered these words to an audience of more than a thousand graduate students and university professors in a very cold, snowy Chicago in early January 1999. Perspective aids understanding.

Wright packs a lot of theology in a small number of pages (207 pages in the new edition). When compared to his longer writings (Thinking about Paul and the Faithfulness of God at 1,700 pages and Jesus Victory of God at 741 pages),  The Challenge of Jesus is one of his shorter books. He breaks down his ‘challenge’ of Jesus into eight brief chapters:

I think some Christians will feel uncomfortable with the first part of Dr. Wright’s book. I struggled with some of his views in the early chapters, but appreciated efforts in the latter. I especially liked the chapter about the resurrection of Christ from the aspect of the ‘apologetics’ of Jesus rising from the dead after being brutally beaten and crucified. As we will soon see, the Christian worldview succeeds or fails on the back of the historical reality of Christ’s resurrection from the dead.

Even as I recommend reading the book, I also recommend testing the waters of the early chapters and following the lead of the famous Bereans. They ‘searched the Scriptures daily to find out whether these things were so.’ (Acts 17:11)

The Challenge of Easter

Since we are just days away from Resurrection Day 2015, I’d like to point to Wright’s perspective about Jesus’ death and resurrection.

Dr. Wright emphasizes the importance of understanding historical events in light of how people of the time period would have understood the reporting of those events. That’s an important method to grasping the full impact of the Bible.

“All our historical study, then, must be done to energize the church in its mission to the world … It is because we believe we are called to be the people of God for the world that we must take the full historical task with utter seriousness. Study all the evidence; think through all the arguments.” (p. 31)

The Apostle Paul made it clear in his first letter to the Corinthians that the resurrection of Jesus Christ was at the heart of the Christian worldview from the beginning.

Here is Dr. Wright’s perspective about the resurrection beliefs of the early Church.

“We find in verses 1-7 what Paul describes as the very early tradition that was common to all Christians. He received it and handed it on; these are technical terms for the handing on of tradition, and we must assume that this represents what was believed in the very earliest days of the church back in the early 30s.” page 141

Wright believes that the most important thing about what Paul wrote at the beginning of 1 Corinthians 15 is what Paul understood the resurrection to mean. Rather than it being a matter of the opening up of ‘a new religious experience’ or proof of survival, ‘of life after death,’ Wright believes Paul meant that Scripture had been fulfilled and –

“the kingdom of God had arrived, that the new age had broken in to the midst of the present age, had dawned upon a surprised and unready world.” page 142

Dr. Wright concludes the chapter by saying the resurrection narratives of the Gospels are clear on three points.

I especially agreed with this statement at the end of the chapter because it is at the heart of the Christian worldview.

“We had better learn to take seriously the witness of the entire church, that Jesus of Nazareth was raised bodily to a new sort of life, three days after his execution.” page 148

As the Apostle Paul wrote –

It is amazing to realize there were people in the church only a couple of decades after the resurrection of Jesus Christ who were saying there was no resurrection of the dead. That certainly must have been a major concern for leaders of the Corinthian church who brought Paul news of many conflicts, divisions and wrong beliefs within the church. Paul wasted no time in addressing each of the concerns and met the greatest of them head on at the end of his letter.

“But now Christ is risen from the dead, and has become the firstfruits of those who have fallen asleep. For since by man came death, by Man also came the resurrection of the dead.” 1 Corinthians 15:20-21

There is, of course, much more to the book than just this one chapter, but at this special time of the year when Christians around the world are focusing their attention on remembering the greatest days in the history of the Church, the sacrificial death and glorious resurrection of Jesus Christ, we can agree with Dr. Wright that we need to take seriously what we believe and why we believe it.

The Challenge of Jesus: Rediscovering Who Jesus Was and Is, By N. T. Wright, InterVarsity Press, 2015

2 thoughts on “Book Review: N.T. Wright’s ‘The Challenge of Jesus’”

Warning and Lament: The Collapse of Civilizations (Part Four)

Are You A Mature Christian Leader?

Are You A Mature Christian?