J.B. Lightfoot was one of the first names I heard as a young Christian studying about the Greek text of the New Testament. His name came up again and again as an expert in both the Greek language and commentary on the New Testament from the original Koine Greek. Some of Lightfoot’s best-known writings were about the Apostle Paul’s Epistles and the Apostolic Fathers.

InterVarsity Press (IVP Academic) has published an exciting set of three books based on hundreds of pages of unpublished commentaries by Lightfoot. The title of the three volume set is The Lightfoot Legacy (IVP Academic, 2016), edited by Ben Witherington III and Todd D. Still.

I fell in love with both his writing style and depth of knowledge of the Greek New Testament more than 40 years ago. Lightfoot’s commentaries on Galatians, Colossians and Philippians were required reading for Christians who wanted to understand the Apostle Paul’s writings from the originals.

So, it was wonderful news a few years ago to hear that InterVarsity Press was planning to publish previously unpublished commentaries and essays by Lightfoot. The Acts of the Apostles was published in 2014, The Gospel of St. John in 2015, and The Epistles of 2 Corinthians and 1 Peter in 2016.

The editors of the Legacy series did a wonderful job of presenting Lightfoot’s commentary and notes in an easy-to-read format that is great for in-depth study.

I highly recommend The Lightfoot Legacy set of three volumes for all students of the New Testament. This is a treasure for us all.

Publisher: About The Book Set

InterVarsity Press is proud to present The Lightfoot Legacy, a three-volume set of previously unpublished material from J. B. Lightfoot, one of the great biblical scholars of the modern era.

In the spring of 2013, Ben Witherington III discovered hundreds of pages of biblical commentary by Lightfoot in the Durham Cathedral Library. While incomplete, these commentaries represent a goldmine for historians and biblical scholars, as well as for the many people who have found Lightfoot’s work both informative and edifying, deeply learned and pastorally sensitive.

Now on display for all to see, these commentary notes reveal a scholar well ahead of his time, one of the great minds of his or any generation. Well over a century later, Lightfoot’s writings remain a relevant and significant resource for the church today.

Volume 1 covers the book of Acts, Volume 2 explores the Gospel of John, and Volume 3 covers 2 Corinthians and 1 Peter.

“The discovery and publication of previously unpublished commentaries on the New Testament by Joseph Barber Lightfoot is a highly significant event in the history of New Testament scholarship. For a start, these shed valuable light on the reception of the New Testament in the nineteenth century, representing the work of the foremost English scholar of that era whose linguistic and historical skills exhibit a quality of scholarship that few today can match. Not all of his historical, literary or theological judgments look fully convincing today, but his acute reading of the Greek text and his phenomenal range of knowledge can still contribute greatly to contemporary exegesis. Ben Witherington, Todd Still and Jeanette Hagen are to be warmly congratulated for their remarkable success in making such a significant voice from the past resound again today.” John M. G. Barclay, Lightfoot Professor of Divinity, University of Durham

“A profound debt of gratitude is owed to Professors Witherington and Still for relentlessly pursuing, recovering, and editing J. B. Lightfoot’s notes on Acts. Harnack said it best: Lightfoot was a true liberal for he was ‘an independent, free scholar . . . in the absolute sense of the word. He has never defended tradition for the tradition’s sake.’ We need more liberals like that today!” Daniel B. Wallace, Dallas Theological Seminary

“From Bede, the greatest European scholar of the seventh century, to today’s world-class university sharing a world heritage site with a majestic cathedral, creative and careful study has long stood alongside prayer and worship here in Durham. It is therefore fitting that this amazing discovery of Lightfoot’s handwritten manuscripts was made by one of the world’s leading biblical scholars in the cathedral library. For within these pages, Lightfoot embodies that Durham tradition—outstanding independent scholarship offered humbly in the service of God.” Rev. Professor David Wilkinson, principal of St Johns College, Durham University 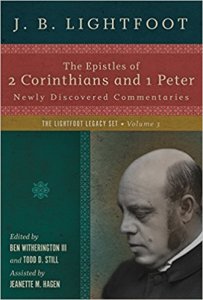 “The discovery of hitherto unknown exegetical works by J. B. Lightfoot is a rare gift, full of potential for fresh insight both about the man himself (acknowledged worldwide as the leading scholar of his day) and, as he would have wished, about texts which he knew so well and which themselves express the heart of the gospel. Hearty congratulations to finder, editor and publisher on an unexpected and exciting addition to the core library of seminal biblical studies.” N. T. Wright, professor of New Testament, University of St. Andrews, and formerly Bishop of Durham

“Joseph Barber Lightfoot has been, for me, in many ways the epitome of what the commentator on New Testament and early church texts can and should aspire to. His detailed knowledge of the literature of the time was unsurpassed, and his ability to shed the light of that knowledge on the New Testament writings was without peer. His commentaries on New Testament texts and the early Fathers retain a relevance and a value to this day almost unique for nineteenth-century scholarship. That a fuller publication of his writings is now available in these volumes is a wonderful bonus for those who want to hear these New Testament and early church texts as they were first heard.” James D. G. Dunn, Emeritus Lightfoot Professor of Divinity, University of Durham

“Thanks to Witherington and his associates and to IVP for bringing this cache of material from the great J. B. Lightfoot into the public domain. His previously published works have remained important (his multivolume study of the apostolic fathers is essential for these writings), and this hitherto unpublished material will now also likely come to be seen as a valuable resource.” Larry Hurtado, University of Edinburgh

“J. B. Lightfoot was perhaps the greatest New Testament exegete in the nineteenth-century English-speaking world, and his works remain useful today. The discovery of his previously unpublished research, which addresses in a balanced and informed way many issues still debated today, is an epochal event in New Testament studies.” Craig Keener, Asbury Theological Seminary

One thought on “Book Set Review: The Lightfoot Legacy”

Christians Slates: Which One Are You?

The Votes Are In – Now What?

Can Christians Prosper In The ‘New Normal’? (Part Six)